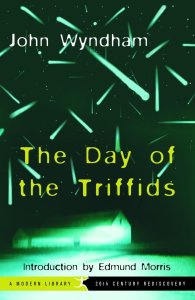 The Day of the Triffids

That’s the only statement I really want to make. But, since this is supposed to be a blog, I’ll elaborate.

I finished reading the book last night, and it was such a slog to get through. I was so irritated once I hit about the half-way mark. And, the problem is… I don’t really know why. But, it could have been a bunch of things:

Was it the character’s actions? Was it the immediate response by men to suggest it was time to repopulate the earth… before they’d even made their escape? Was it the fact that all of the characters appeared to be white, upper class, stuff shirt, obnoxious, idiots? London is one of the most multi-cultural places in the world – I’d expect to see even a bit of that in the 1950s. Was it the bizarre instant “romance” that occurred? Was it the fact that years pass without anything at all changing? Was it the lack of “climax”? Was it the comparison of this catastrophe to the Biblical flood as a way to cleanse the earth of sin? I mean, then why did those people survive? Or was it the fact that the only woman who takes charge, is a misguided fool who fails miserably in her mission?

There were so many things that became more irritating as I read. I didn’t mind the writing – and I actually didn’t at all mind the narrator/main character, or his love interest. They were interesting and resourceful people. They seemed to have reasonable responses to things, and tried their best to survive in the situation. But, all of the other entitled people who did survive…and the plot that just went nowhere… just became so tedious.

Bill Masen, bandages over his wounded eyes, misses the most spectacular meteorite shower England has ever seen. Removing his bandages the next morning, he finds masses of sightless people wandering the city. He soon meets Josella, another lucky person who has retained her sight, and together they leave the city, aware that the safe, familiar world they knew a mere twenty-four hours before is gone forever.

But to survive in this post-apocalyptic world, one must survive the Triffids, strange plants that years before began appearing all over the world. The Triffids can grow to over seven feet tall, pull their roots from the ground to walk, and kill a man with one quick lash of their poisonous stingers. With society in shambles, they are now poised to prey on humankind. Wyndham chillingly anticipates bio-warfare and mass destruction, fifty years before their realization, in this prescient account of Cold War paranoia.

I don’t know. I’m just not sure what I’m supposed to make of this. I even went through the guided “book club” questions at the back of the book. And even, they were confusing as discussion points.

Despite how much I was irritated reading this, there were still a few things that I liked about the book. The writing was pretty good. It was easy to read, easy to follow, and easy to picture. I wouldn’t mind reading more of John Wyndham’s books, and I believe I was given another of this for my birthday the same year I was given this one. So, I’m glad to know it won’t go to waste.

I really liked considering the moral dilemma that the remaining sighted people had to face. What can be done to help these people? Or, should they be helped at all? What are the potential dangers in a society where food and supplies are in a limited quantity? These seemed like interesting discussions that the novel explored at some length.

So, while I didn’t like the book in general, I don’t think it was a bad book at all. Just not for me. I’m glad I read it, and I’ll definitely check out other Wyndham titles in the future. But, I also know I won’t be returning to this book any time soon.

2 thoughts on “Book Review: The Day of the Triffids / by John Wyndham”