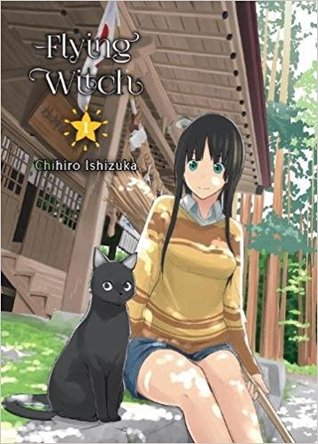 Flying Witch is a slice-of-life shounen manga about a 15-year-old witch, Makoto Kowata, who has left her home (with her black cat familiar); as is the “right-of-passage” custom to become a fully-fledged witch (think Kiki’s Delivery Service). I loved the characters in this series – they are so fun, quirky and just like-able. I particularly love the way the characters react to Kowata upon learning she is a witch and even more so, Kowata’s naivety in adjusting to her new surroundings. I think a lot of people will really love this cute, calm, and cheerful slice-of-life manga.

BUT… there are some major issues with it for me.

I hate this art style! I don’t know if I will ever get behind fully digitalized illustration. The background scapes suffer enormously in this style, and the screen tones leave me feeling cold. I can’t see a creator’s hand in this type of work. You can’t learn anything about an artist who hides behind their computer… it’s incredibly dissatisfying.

And, the translation: The translation itself is fine. But, I HATE the choice used in translating the thick accent of Kowata’s uncle. Her uncle is a rural Aomori farmer(?) — so, of course the natural conclusion is that he be written sounding like Foghorn Leghorn?! This feels incredibly lazy. Instead of trying to seek a more natural translation, we have an incredibly generic cartoonish, and out-of-place sound.  In an otherwise quiet story, this loud, and brash type of accent doesn’t match the quiet tempo, this ‘lifeless’ art style, and it certainly didn’t match the uncle’s character design. I’m not from the U.S. so, my experience of this accent is limited to television, but the stereotypes that I’ve gleaned from that at least ruin my expectations of what this character should actually sound like. An invented accent with the same or similar characteristics and cadence of a rural Aomori prefecture dialect would have been a much better approach. This cheapened the experience for me; more work would have been appreciated.

This could have been better: the story is there, but the art and packaging is missing. I’ll continue borrowing and reading the series from the library as it’s released but, it won’t be joining my own collection.