I’ve been thinking of this list for a while now. I was originally going to film a video, but then I saw DynamicDylan film a tag which he titled 50 otaku facts. 50 facts is a lot to share in a single video, so I’ve been debating what to do about it. I’ve even filmed that video twice, but I haven’t liked the result either time. It’s weird to talk about yourself so much in such a short period of time. I’ve decided to scale it back to my original plan, and just do 25 facts… and so that I’m not actually “talking” about myself, I’ll post it here! haha!

1.  I discovered Japanimation by watching Sailor Moon. But, my first official anime title was Blue Seed.

2.  Of all anime I re-watch Blue Seed, 3X3 Eyes, Shura No Toki, HunterxHunter (1999), Azumanga Daioh, The Vision of Escaflowne, and Hikaru no Go the most. But still I only watch about 2 or 3 shows a year at the most these days.

3.  My favourite anime opening songs. At least, these are songs that can stick in my head for days. There are others, but this post is long enough (and also I couldn’t find good videos on YouTube for sharing)!

Zenki (I actually don’t know who sings this… send help!)

5. The Best line in anime (and probably one of the most famous) is: Omae wa mo shinde iru from Fist of the North Star. It often comes to mind when someone makes me angry. It’s good on so many levels! But, I have yet to say it to anyone in a fit of anger. ^ ^;

6. The first manga I read was Nausicaa of the Valley of the Wind by Hayao Miyazaki in 2003, from my public library. It legitimately changed my world!

7. The first manga I bought was Wedding Peach… also in 2003. Probably the day after I finished reading Nausicaa.

8. I relate most to Madarame from Genshiken (season 1).

11. My biggest pet peeve are translations that try too hard to Westernize a title. Titles that attempt to remove the Japanese characters, settings and situations from it. Not only does it feel culturally insensitive, it feels insulting to readers. Give readers some credit! We can handle knowing that the title is set in Japan, has Japanese themes, and guess what, star Japanese characters! Gasp!

12. My 2nd biggest pet peeve are translations that neglect to translate Japanese terms like kawaii. The English use of the word kawaii and the Japanese use of the world kawaii are two completely different things! They are NOT equivalent. Not unless the character speaking it happens to be an otaku from the West. That’s the only time that it works! gah!

13. RANT TIME: I used to read online scans, but now have a very strong bias against them. Regardless if they are licensed in your country yet, or not… they were created illegally. AND their existence hurts the industry that I love. If it’s not licensed in your country, and you can’t read the original English, you are NOT entitled to read it. Not being able to afford manga is NOT a good excuse to read scans. Neither is the lack of availability in your country. If you are reading scans with the intention to invest in the series you like later, you are hurting the industry (have you even considered you also need to support the creators you don’t like?). Don’t read scans! But, if you are doing it, I beg you, don’t tell me about it! I am now on a mission to collect EVERY volume that I read through scans; even the titles I hated. I’ve bought about 200 in the last couple years… and have about 800 to go. This may take a while!

14. I love re-reading series. I would be happy to only re-read my favourite manga forever!

15. I re-read the series From Far Away 7 Times in less than 7 days. It was an experiment to see what rereading something over and over would be like. I’m glad I picked that title, it’s still one I can pick up any time and enjoy.

17. My least favourite topic is World War 2. I’ll read it. But, I hate feeling the feelings.

18. My favourite genres are historical, romance, and gekiga (despite it often being about the war). I also prefer older titles from the 70s and 80s to modern stories. I’m old, it makes sense I’d prefer old titles, too.

19. My least favourite genre is harem. I can’t express to you how booooooring I find it!

20. My favourite trope/scenario in manga is the indirect kiss! It’s just so adorable (and absolutely ridiculous) every single time. 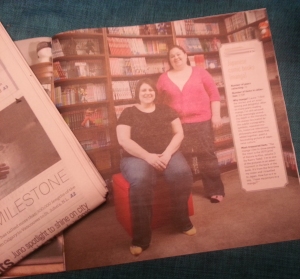 22. Our manga collection was featured in a local magazine in a photo essay about collectors! Look at those empty shelves – what happened?! haha.

23. We used to regularly buy so much manga at one local comic book store, that they nicknamed us “the manga sisters” and used to print it on our receipts.

25. I strongly believe that anime and manga have enriched my life. I’ve gotten close to my sister, made great friends, learned a language (sort of), tried many interesting hobbies, and lost a lot of money while having a ton of fun! I’ve genuinely enjoyed every minute of it!

I’m not going to tag anyone to do this, but if you’d like to please feel free! But don’t forget to put a link in my comments, so I can find you! 😀